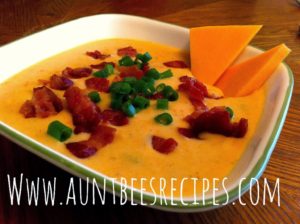 Some of our favorite recipes (and a few disasters) were created out of a last minute substitution.  You know, when you find out at the very last minute that the can of tomato sauce you thought was in the back of the pantry was really a can of enchilada sauce or you open up a package of cream cheese that you bought the day before and the whole thing is green (seriously happened to me on Thanksgiving of all days), or you remember right as you are heating up a bowl of your husband’s favorite Ultimate Loaded Potato Soup that you had used the last of the Cheddar cheese at midnight the night before to top an epic plate of nachos while watching Teen Mom. (Or is that just me?)  So here I was warming up my husbands soup, already fried him a little bit of bacon for the top and not wanting to give it to him without the cheese because even though he would NEVER complain, I know the cheese is his favorite part.  I searched the fridge one last time in desperation and spotted a half empty jar of Cheese Whiz.   Before I could change my mind, I scooped about a cup of Cheese Whiz into my whole Pot of Soup.   And the rest, as they say, is history.  It was SO GOOD!  Dare I say, even BETTER than my regular loaded potato soup TOPPED with shredded cheese?  Give this a try and tell me what ya’ll think!
Ingredients:
4 Slices of bacon, chopped raw
3 stalks celery, finely diced
3 carrots, peeled and finely diced
1 large onion, diced
3 lbs of your favorite potatoes, peeled and diced
3 TBSP unsalted butter
3 TBSP all purpose flour
4 cups chicken broth (divided)
2 cubes chicken bouillon
1/2 tsp Tony Chachere’s creole seasoning
1 tsp salt
1/2 tsp black pepper
4 cups whole milk
1/2 cup heavy cream
1 cup Cheese Whiz
For Garnish: green onion and bacon
Add chopped bacon to a large pot. (I like to use my dutch oven)  Cook bacon over medium heat until crispy and remove from pan, leaving the bacon grease.   Add the carrots and celery to the pot.  Stirring occasionally for 5 minutes.  Next add the onion to the veggie mixture, stirring occasionally for 5 more minutes.   Now add the diced potatoes, and continue cooking and stirring occasionally for 10 more minutes.  In a separate small pot, make a roux by melting 3 TBSP of butter and whisking in 3 TBSP of flour until lumps are gone.  Continue whisking in 1 cup of the chicken broth, stirring until completely smooth.
Add the contents of the small pot into the large soup pot full of the potato/veggie mixture.  Add in the rest of the chicken broth, chicken bouillon cubes, salt, pepper and creole seasoning and stir.  Reduce to a simmer, cooking for at least 30 more minutes or up to 1 hour, stirring occasionally.  Next add in the milk, cream and cheese whiz.  Stir until combined.  At this point, we like to use our immersion blender to get the soup mostly smooth with just a little bit of chunks for texture.  Before we had the immersion blender, we would put half the soup in a blender until smooth then return it to the soup pot.  Either way works and gives the soup a nice thickness.  Taste for seasoning and add toppings of your choice!  Enjoy!